РусскийEnglish
Map of sights of Astana

Astana became the capital of Kazakhstan in 1997. And since then the city has changed to unrecognizability. This modern megalopolis causes genuine admiration in the people from all over the world considering that residents of Kazakhstan still live in yurtas. Astana by right is considered the city of the future because of  large number of investments and innovations is put in its development. The left coast of the city has been built from scratch for several years, and now construction is continuing. Just imagine this modern city among boundless steppes. Here high-rise business centers and housing estates, shopping centers, avenues and parks. Guests of the capital often compare Astana to UAE's Dubai. There is no wonder, the cities’ architecture is very similar, and development in the country happens also promptly. Look at "Nothern Lights" apartments or "Emerald Quarter" on Green Water Boulevard. Walking on the new districts of Astana, it is possible to appear in London and to take a photo near Big Ben in the English quarter, and to move to Paris' Eiffel Tower located near the Paris quarter. All around there are national color skyscrapers and sport facilities, the unique ones of it's kind. If the history, art and actual problems are interesting to you, then pay a visit to the National museum and the Palace of Peace and Reconciliation also known as Pyramid on the other side of which is the Kazakh Ely monument signalizing the beginning of Astana's so called “Central axis” which, for sure, is ended on the most unique and world huge tent – Khan Shatyr. In the middle of this end is standing the heart of innovations – the exhibition center “Korme” where all Astana's exhibitions take place. In 2017,Astana hosts the international exhibition “Expo 2017” and specially for it there will be built new quarters of living facilities, shopping centers, and sophisticated exhibition pavilions one of which is the biggest globe full covered in glass. Astana is the city of most unique and astonishing constructions, here are kind, welcoming and most beautiful people. Also you shouldn't forget about the right coast, because Astana began there.Many inhabitants and city visitors like the old center and the embankment more than new center. Here you will feel the special cozy atmosphere. The Italian singer Son Pascal has even devoted the song to the right coast. Also you shouldn't forget about the right coast, because Astana began there.Many inhabitants and city visitors like the old center and the embankment more than new center. Here you will feel the special cozy atmosphere. The Italian singer Son Pascal has even devoted the song to the right coast. And Astana has the most beautiful sky. The capital will win your heart the greatness, simplicity and energy!

10 things must be made in Astana:

To pass all Green Water Boulevard from a monument "The Kazakh eli" to the shopping and recreation center "Khan Shatyr" and to swim under his dome on the Sky Beach Club .

To walk on the central embankment and to look at evening light show.

To admire the most beautiful sky and the smartest decline.

To reflect about eternal in the Palace of Peace and Reconciliation.

To take a walk in the night city.

To descend on the ballet in Astana opera.

To feel as the acrobat in the trampoline center "Vysota".

To visit the central mosque of the city - "Hazret-Sultan". 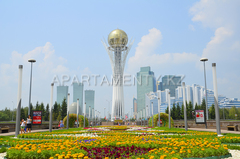 Map of sights of Astana

Astana became the capital of Kazakhstan in 1997. Since then the city has changed. Those people from all over the world who think that residents of Kazakhstan still live in yurtas see this modern megalopolis with great buildings and a modern architecture in Astana. Astana is considered the city of the future because of  large number of innovative ideas and investments is put in its development. The left coast of the city has been built from scratch for several years, and now building is continuing. Just imagine this modern city among boundless steppes. Astana is the city where you can see many attractions. There are lots of unique building in Astana. The world's largest tent - Khan Shatyr, the most remote from the seas and oceans aquarium Duman, the Pyramid (Palace of Peace and Reconciliation) designed by the architect Sir Norman Foster. The Pyramid was specially constructed to host the Congress of Leaders of World and Traditional Religions. It contains accommodations for different religions: Judaism, Islam, Christianity, Buddhism, Hinduism, Daoism and other faiths. And, of course , the most symbolic architectural structure of Astana – Bayterek, which is a monument and observation tower in Astana, the capital city of Kazakhstan. A tourist attraction popular with foreign visitors and native Kazakhs alike, it is emblematic of the city.

Read more about sights of Astana 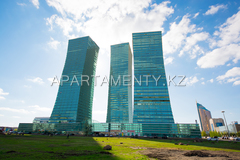 "Nothern Lights" housing estate - luxury apartments in the centre of Astana with the window view to Bayterek and Khan Shatyr, Korme exhibition centre and Keryen Mall

If you like the modern creative architectural constructions, you will like "Nothern Lights" by all means. The modern housing estate is in Green Water Boulevard (Nurzhol Boulevard) which is located on the left coast in the neighbourhood from shopping and recreation center of  "Keruyen", exhibition complex "Korme", the mosque "Nour Astana" and Bayterek. The project was put in operation in 2011 and it is considered one of the most interesting constructions of the city. Three towers of an unusual form will make you conceited, height of one of these is 180 meters (41 floors). 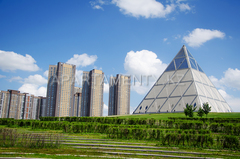 Palace of Peace and Reconciliation (Pyramid)

Unbelievable, but in Kazakhstan there is the pyramid. The modern building constructed by Norman Foster's project is located at 37 Tauyelsizdik street. The pyramid bears idea of the world, consent and tolerance, and 130 pigeons on a glass dome symbolize a multinationality of Kazakhstan. here is a park near the Palace where you can reflect on global modern values, the everyday problems and just breathe fresh air. If you cross the road, you can see one more sight of the capital - a monument "The Kazakh eli", and near it there is a Palace of independence and the Palace of creativity "Shabyt", one more construction with non-standard architectural concept.

Read more about the Palace of Peace and Reconciliation (Pyramid) 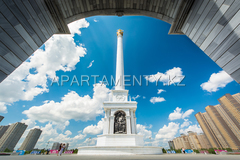 Amazing panoramic views of a left bank of Astana open from Independence Square. All power and freedom of the country is felt on the square among majestic monuments and fountains. There are the National Museum of the Republic of Kazakhstan, the unique Palace of Peace and Reconciliation, the cathedral mosque Hazret-Sultan, National university of arts "Shabyt" in the neighbourhood.  The white marble colonnade and a stele, modern palaces and the museum show all power and freedom of modern Kazakhstan. New central square with fantastic architectural constructions in Astana - is the place obligatory for visit.

Read more about Independence Square and monument "The Kazakh Eli" 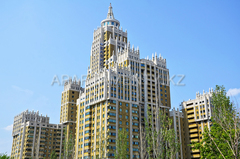 On the left coast there is a building which similar to MSU. Actually it is "Triumph Astana" apartments which is located at 11 Kabanbay batyr street. The complex consists of  7 sections and includes a set of apartments of the different area, cafe, restaurants, ATMs, supermarkets, shops, the round-the-clock place of medical attendance, a gym and even the 25-meter pool. All entrances have concierges and system of protection work. Tourists who want to live in the new center can stop not only in rental apartments , but also in hotel on upper floors. An excellent decision for tourists – is Aparthotel "Triumph Astana" where service flats are provide (breakfasts, towels, dressing gowns, bathing accessories and additional paid services). 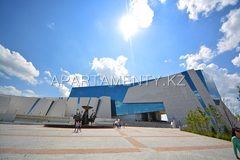 National Museum of the Republic of Kazakhstan. Museums of Astana.

Near the Palace of Peace and Reconciliation there is the biggest museum in Central Asia - the National museum of the Republic of Kazakhstan. You certainly turn the look of one more unusual architectural concept. Having visited him, you will be able to travel in time and space. The entrance to the museum costs 300 tg, and also low fare tickets for children, students and pensioners work. You can use services of guides, but also independent excursion will be very informative because projectors, holographic cards, prototypes and audioguides are provided everywhere. The unique museum complex consists of seven blocks of different number of storey and most likely you will lack the whole day to bypass all halls.

Read more about National museum of Kazakhstan and museums in Astana 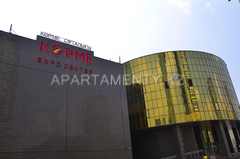 The exhibition center "Korme" - is a modern construction with the spacious halls, the stand spaces equipped with conference rooms, storage facilities and a parking.  A lot of exhibitions are organized every month  and everyone can visit what is more interesting. The complex is located on the left coast at the address Dostyk 3. The exhibition center is an indicator of cultural and historical development of the country. If you attend one of interesting exhibition you can walk on Nurzhol Boulevard among the main left-bank sights. 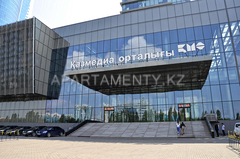 "Kazmedia ortalygy" is located in Nurzhol Boulevard  near the Emerald quarter. There is one more creative place opposite to it - the exhibition center "Korme". The Kazmedia center – is the modern technological building which unites virtual studio, film-making pavilions, recording studio, conference rooms, offices of TV channels and radio stations, the exhibition hall and a co-working zone. The media school for development and advanced training of workers of mass media functions is created here. 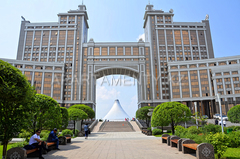 Nurzhol Boulevard (Green Water Boulevard) – is the pedestrian zone on the left coast where administrative, housing and entertainment complexes are located. The boulevard passes from the Independence Square to shopping and recreation center "Khan Shatyr". The three-level construction is the center of the new city and the ideal place for long walks and acquaintance to the city. The boulevard called Green water because of blue-green color of buildings, a large number of fountains, trees, ideal lawns and flower avenues. Creative architectural concepts immerse you in energy of the future. Walk on the boulevard gives the chance to admire  "Emerald quarter", large "Kazmedia center's" screens, "Nothern Lights" apartments, the fountain on the round square. 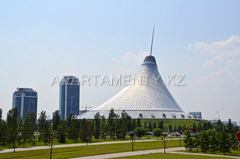 Khan Shatyr center is a symbol of capital of the Republic of kazakhstan for several years. The biggest tent in the world designed by Norman Foster is located at 37 Turan street This one of the best eco-constructions in the world has the cozy atmosphere created by a large number of plants and penetration of a sunlight through a transparent roof. The unique architectural miracle includes a supermarket, fashionable corporate boutiques, food courts, offices, playgrounds and attractions. Inhabitants and guests of the capital can have a rest on the beach under a dome where all the year is +35 Celsius degree.